Since July, my priorities have been on keeping my project(s) charging along, writing All The Papers, and making lots of good things happen so that I can stay on at the MRL - because on top of all that, my lovely other half and I have bought a disastrous pit of rubble house. We acquired said pit house in June, thinking we'd do a bit of necessary work over the summer, decorate it in October/November, and move in at the beginning of December. We estimated these timings while fully taking into account the dire warnings from everyone we know that such things always take three times longer than you think they should. Well, the status of said pit house went from bad to worse as soon as we bought it...  We moved in last week. It's mostly built and almost entirely undecorated, and still has consumed just about every waking moment from me and my lovely other half for the past six months.

In cases like these, work remains the top priority, with a roof over one's head a close second, and blogging about one's work slides down the list a bit.

But I'm ringing in the new year with an exciting proposal! Come to Denver in early May and have fun with the cool kids of HCI! Deadline 27 January. https://mixedreality.tech.blog

Happy merry good things and a blissful 2017 to all :)
Posted by Jocelyn Spence at 05:43 No comments:

another year older and deeper in debt

Deeper in debt to this blog only, thankfully nothing financial. My birthday came and went last week, reminding me that the last time I posted here, I was a whole year younger than I am now!

June found me in Stockholm for a week at the International Federation of Theatre Research conference, part of the Intermediality in Theatre and Performance Working Group. I took part in Barcelona back in 2013, when I was working on my thesis, a pure (or purist) pursuit of the amalgamation of performance studies and HCI. Three years later, I came to Stockholm as a researcher in a Computer Science department, working on an EPSRC project (and if that means nothing to you, read Extremely Prejudicial against Silly Research Cons, a.k.a. most arts research). I felt a bit of trepidation at the outset... but then the project was very well received, and I got a vast amount out of discussions around it. Really, this group could hardly be any more friendly and helpful.

Besides that - lots of meetings, workshops, bid-writing sessions, a small side project, two or three CHI papers in the works, and about a squillion hours spent on Part 2 of The Rough Mile (almost done, almost!), plus a nearly three-week visit from various family members - that's been about it for my June and July.

There was also a short-lived attempt to get a PED discussion going on LinkedIn, thwarted by the fact that said social network sent me no notification whatsoever when people responded to my post! I only noticed that I'd had some replies several weeks after the fact when I looked at my profile for another reason. Mostly, I'm embarrassed, but partly I'd like to have a wee word with their UI people. Seriously? I need to physically return to the page every time I wonder whether there's been a reply to a conversation I started? At this point, it's been a couple of weeks since I first realised I'd missed the conversation, and I've forgotten to post to the conversation that I hadn't seen the replies, because there's no function for engaging with me as a (very absent-minded) contributor. Clearly I've missed a trick here, and perhaps LinkedIn has, too. In any case, I'll try again to make contact with the outside world, and to maintain the conversation here.
Posted by Jocelyn Spence at 08:59 No comments:

yin and yang, CHI and Tapra

I had far too exciting of a time at CHI this year to get around to blogging about it for - how many weeks? - even though I was only at the conference for one day (and a party). I think I managed to cram in a good portion of the entire conference's worth of great conversations and interesting ideas into that short time frame, though! So many people! So many ideas! The excitement included the Springer author meet-and-greet for people who had recently published books with them. I'd love to be so cosmopolitan and jaded that such an event wouldn't even register, but that would be a lie and a half.

And then, just a week and a day after I got home from CHI, I was off to High Wycombe to present our ongoing project here at the MRL, The Rough Mile, at a practice-based performance event titled 'Returning Ghosts'. This was a symposium, every bit as intense as CHI but for exactly the opposite reason - there were only a handful of us there, but we were all intimately familiar with (and excited about) intermedial autobiographical performance. Where was this event when I was doing my PhD??? This was an interim event for the Performance and New Technologies Working Group, part of Tapra (the Theatre and Performance Research Association).

I feel like both halves of my brain have now been equally overstimulated, and I'm ready to take on the world! (Which you can tell because I've been too preoccupied taking over the world to post here...)
Posted by Jocelyn Spence at 06:40 No comments:

Soon to be hot off the presses: the 'drama and performance studies' chapter of the 2016 edition of The Year's Work in Critical and Cultural Theory, courtesy of the lovely and talented Patrick Duggan and myself. I'm very excited that Patrick brought me into the YWCCT fold. It's an opportunity to submerge myself in all the best book-length writing in the field(s) of theatre, performance, and drama, and then come up with an (entirely unbiased) discussion of (what Patrick and I find to be) the most salient, compelling, trend-setting, and otherwise noteworthy ideas from 2015. I had a grand time working on it, and we hope you will have a grand time reading it when it's out!

Working at the Mixed Reality Lab keeps me very tightly anchored in HCI and computer science, so while I spend a lot of my time evangelising for performance studies, it's always against the backdrop of worthy projects on algorithmic optimisational graphene flux capacitors... ok, I might be exaggerating a bit, but some of these MRL folk are doing some pretty hard-core stuff.

Working on the YWCCT chapter is a wonderful chance for me to turn the tables and immerse myself in the norms and expectations of an unabashedly arts-centric academic community. The work I'm doing now in PED gets me even more motivated to view the performance elements of what I do in their own right, not simply as feeders into HCI's giant maw.
Posted by Jocelyn Spence at 13:04 No comments:

next project, The Rough Mile

The next foray into PED is our new audio-walk music gifting performance project, The Rough Mile.

Yes, that's a crazy mouthful. Totally inelegant. Is it a walk, a performance, a gift, a musical experience? All of the above!

And if you're around Nottingham on either the 28th or the 29th of April, come give it a try! There's more information at bit.ly/1R9yXJP. 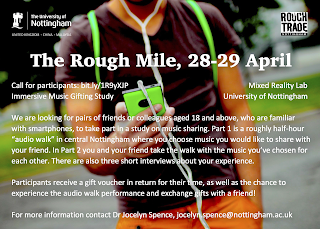 Posted by Jocelyn Spence at 06:03 No comments:

The hard copy version of my book is now available! Here's the blurb:

The author presents a step-by-step explanation of the Performative Experience Design methodology, along with a detailed case study of the design process as it was applied to co-located digital photo sharing. Finally, the text offers guidelines for design and a vision of how PED can contribute to an ethical, critical, exploratory, and humane understanding of the ways that we engage meaningfully with digital technology.

Researchers, students and practitioners working in this important and evolving field will find this state-of-the-art book a valuable addition to their reading. 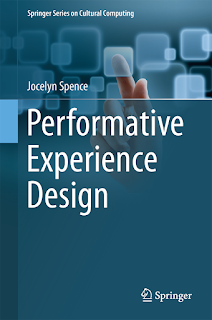 Posted by Jocelyn Spence at 10:57 No comments:

the e-book is loose!

Apparently, the e-book version of Performative Experience Design is available for purchase! I haven't seen the completed text myself, so fingers crossed that nothing went horribly wrong at the last minute.

Of course, these texts are meant for libraries and suchlike to purchase, so if you're not A) a librarian or B) a passionate devotee of performance in an HCI context with C) money to burn, please do not interpret this post as a request to boost my Amazon rankings!

More to the point, if this topic/blog/book is of interest, please get in touch! The more momentum we can get behind the intersection of HCI and performance - no matter what the terminology - the better off we all are.
Posted by Jocelyn Spence at 10:18 No comments: